skip to main | skip to sidebar

Boost your HT for almost nothing 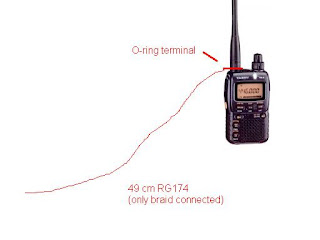 As almost every ham radio operator, I’ve a small portable radio. According to QRP philosophy, I choose to buy a Yaesu VX-2: very small, not very expensive, max power 2.5W with built-in battery. Using this nice radio I feel a bit frustrating for the short range of the communication allowed. The first thing I’ve done is changing the original useless rubber duck antenna with a telescopic quarter wave, and the results were very good. Navigating Internet, in HamUniverse Antenna Projects (in particular an article by Edward KE4SKY, http://www.hamuniverse.com/htantennamod.html), I’ve found another nice (and cheap) improvement to try: a quarter wave counterpoise.

The trick is trivial, and is surely well known to all hams operating in HF: a quarter wave vertical MUST be used with a good ground plane or against one or several counterpoises. This is true also in VHF region, but what is the amount of improvement? I soon arrange a quick-and-dirty counterpoise for my VX-2: 49 cm of speaker wire wrapped around the SMA antenna connector: the improvement in RX seems to be incredible, better than 1 s-point, in some conditions even 2 s-points!

The performance improvement is significant: we can note that 1 s-point is 6 dB; this means that my VX-2 with quarter wave counterpoise is more powerful that a 5W HT without counterpoise. In TX same situation: other hams reports that is a +1 s-point when I use the counterpoise.

I’ve built a more clean and stable version: a 6mm ring terminal and 49 cm of RG-174 (only braid connected). The 6mm terminal fits well in the SMA connector, and screwing the antenna lock counterpoise firmly in place. 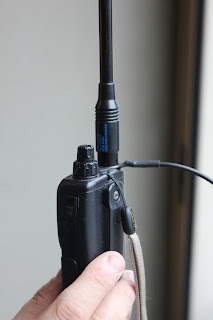 I’ve also built a two band version, using speaker wire, one of which cutted at 17cm and the other at 49cm, the performances are a little better on 70cm. In past times, it was a commercial version of the counterpoise, which is called “Tiger Tail”. In the foto below, the two "tails": 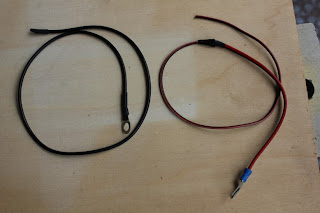 The counterpoise is useful for all kind of quarter wave antenna, even shorted quarter wave or rubber ducks. Of course, I try also many conventional 5W HT, with the same (good) results in terms of performances. In UHF the improvement is less noticeable with my telescopic antenna, which is a half wave on 70cm.

This simple trick really performs well, is very cheap and fast to build. I’m surprised that is unknown by most ham radio operators. Try it!